Discover the “Piceno” Region: its cities and villages!
Generous land of food and wine but also rich in contrasts in its opposites that are so close that they merge with one another: the mountainside that drops to the hills and down towards the sea, the warm villages in terra cotta and the moon whiteness of the travertine, the bustling villages and calm countryside, all merging harmonically and definitely worth seeing.

Some of the most characteristic cities and villages are: 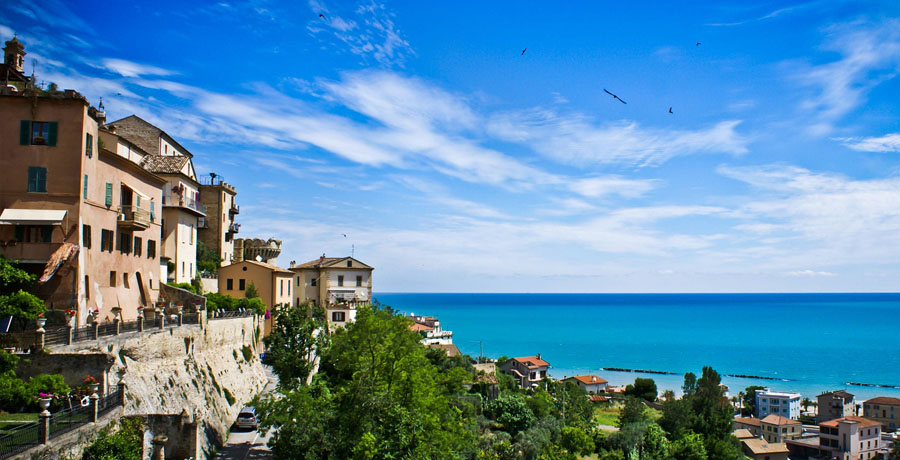 Grottammare, overlooking the Adriatic Coast between the green of its pine forests, orange groves and palm trees, with its golden beaches and the clear light of the sea. Clean water, the sandy coast, the charm of the picturesque views of the old town and lush vegetation, composing a mix of colors and forgotten scents that make unique our town. Grottammare is continuously awarded with the Blue Flag.

San Benedetto del Tronto is an town of 47,298 inhabitants in the province of Ascoli Piceno, located along the Adriatic coast of southern Marche at the mouth of the river Tronto, the fifth in the region by population after Ancona, Pesaro, Fano and Ascoli Piceno. It is the most important and well-known of the Riviera, word originally referring to just coast sambenedettese since expanded but also to those of Groton and Cupra Marittima and even some inland towns bordering after the birth of tourism consortium of the same name. The city attracts visitors from all over Italy and Europe and is a major tourist centers of the Marches for number of appearances, in addition to possessing the largest fishing port on the Adriatic and among the largest in Italy. Since 1999, the city was awarded the Blue Flag uninterruptedly with star, the recognition that the FEE (Foundation for Environmental Education) issue to the European coastal resorts that meet quality criteria related to the parameters of various types including those relating to bathing water, to cleaning the beaches and the marinas.

Came about at the confluence of two streams, Castellano and Tronto, and developed on perpendicular roads that are still recognisable today. The heart of the city are the two squares: Piazza del Popolo and Piazza Arringo, even if the distinctive feature of Ascoli, even more so than its buildings, is definitely the whiteness of the city, made mostly of travertine. In addition to the many churches, museums and art galleries, worth mentioning is the Caffè Meletti (one of the historical Italian cafes in Liberty style) in Piazza del Popolo and the bridge over the Tronto stream, built in the Age of Augustus, with round arch, one of the biggest in terms of clearance (over 22 meters). It is still perfectly intact, also thanks to the renovation work carried out on it, and can be crossed from the inside. Just down the road from the city are the museums of the Papal Paper Mill, in the renovated building of what was the mill’s factory ever since medieval times and which exploited the driving force of the stream’s water to power the machines. Surprising in their perfection and awesomeness, the various rooms will intrigue children and  same time adults.

Is an ancient town whose origins date back even to Pelasgian times and, subsequently, was inhabited by the Piceno population and later conquered by the Romans. Its greatest time of splendour was in the Middle Ages. It is one of the best preserved centres of the whole region and this is where the Serpente Aureo Theatre is located, which dates back to the mid nineteenth century and is a small work of art within the Town hall. Its 50 boxes, distributed in 3 orders in the shape of a horseshoe, enclose the scene and the stalls. Impressive is the central rose window that portrays Apollo with three muses (of music, of comedy and of tragedy). Another gem of Offida and much older than the theatre is the Church of Santa Maria della Rocca: a roman-gothic building dating back to 1330 with wonderful frescos of the Master of Offida (working between XIV and XV century).

Surrounded by medieval walls is a hamlet perched on a hill. It is the home to impressive public and religious buildings, among which is the Mercantini theatre and the Church of Santa Maria, which were all built between 1300 and the first decade of 1800. This is not the only reason why the hamlet is worth visiting: you can also admire its amazing decorations of the private homes and walk the narrowest alley in Italy in person (not advisable however for those who suffer from claustrophobia because it’s only a mere 43 cm wide!).

This hamlet too is located in the hills and belongs to the district of Ascoli Piceno since 1292. Its old town centre with castle walls and amazing alleys preserve the wonder of ancient times to perfection. From here, especially on a clear sunny day, you can enjoy the magnificent views from the hills to the coast over the whole Tronto valley. Worth visiting is the church of San Niccolò di Bari and relevant museum, where works from the XIII to XVIII century can be admired.

Is an ancient settlement dating back to the prehistoric era, even if it became a stable settlement first with the Piceno civilisation and later with the Romans. What the eyes notice first today is the higher medieval part of the town and the marine hamlet, dating back to the mid nineteenth century, further down. Here, in addition to its famous beach, worth visiting are the malacological museum and archaeological museum of the district, with remains from the various eras.

Is a small town in the hills rich in remains from the past: enclosed around the remains of the Fortress of the Dukes of Acquaviva, this little town has kept its elegance and its antique beauty intact. In addition to the Fortress, among the other monuments of historical and artistic interest worth mentioning, are the Church of San Rocco (XIII century), the Town hall and the Church of San Lorenzo degli Agostiniani, which hosts some paintings of Carlo Crivelli.